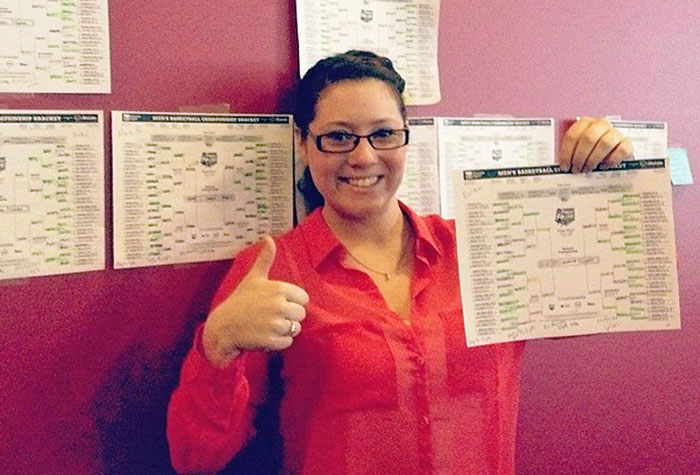 It’s that time of year again… time for the Madness. You can have your Ides of March and your St. Patrick’s Day. Here at CMA, a Seattle marketing company, we get super excited for March Madness. Okay, maybe not super excited, but almost everyone at our Seattle advertising agency was in our March Madness pool last year.

Most people predicted they had the winning bracket, but Erika on our media services team proved that it’s her world and we just live in it. It came down to the final game, but Erika showed her superior NCAA basketball knowledge and claimed almost fifty big ones. Now we’re ready to Duke it out again this year!*

If you are also super-excited about March Madness 2015, we recommend a quick trip to www.ncaa.com/march-madness. You’ll find mobile apps for “March Madness on the go” and a glimpse of Rihanna’s “American Oxygen” video, which will serve as the theme song for NCAA March Madness 2015. “Breathe out, breathe in…” breathe it all in.

The official NCAA March Madness bracketology will be announced on Selection Sunday (March 15) and then you have three days to predict the winners. (BTW, the confusingly named “Second Round,” which begins on March 19, is actually the traditional opening round of 64 teams. Most pools start then. The “First Round” is a four-team play-in round that CBS doesn’t even televise on the two nights prior to March 19. Got it? …good. Let the games begin!)

“There was madness in any direction, at any hour… You could strike sparks anywhere. There was a fantastic universal sense that whatever we were doing was right, that we were winning.”
–Hunter S. Thompson, Fear and Loathing in Las Vegas