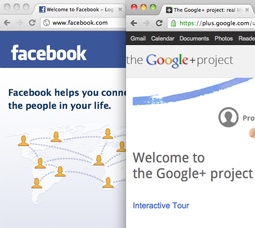 Social Media Marketing with Google Plus

Google Plus (aka G+ or Google+) is Google’s most recent answer to Facebook. And, by all means, Google Plus appears better equipped than Google’s previous efforts (i.e. Google Buzz, Orkut, Wave) to challenge Facebook’s social networking reign. Google wants to strengthen its social identity because social networking platforms possess a more growable user-base than search engines. Social users also stay engaged longer, increasing advertising exposure. And Google would love to reclaim some of the advertising that has gravitated to Facebook in recent years.

But what’s in it for you? How does Google Plus compare to Facebook and what are possible user advantages? In theory, Google has turned its entire search engine into an expansive social network. There are considerable marketing implications, particularly in relation to the world’s most popular search engine.

“Since this is Google’s own product, they will prefer social tick marks through the +1 Button over those coming from Twitter, Facebook and social bookmarking. You cannot help but see that this will impact organic search results. Web pages that generate many +1?s will probably populate earlier on Google search results than those websites that do not.”
–Melih Oztalay, Search Engine Journal

Google wants to impress the social networking community with fresh features. A new grouping system called “Circles” allows users to organize “friends” in social circles with titles like family, co-workers, clients, etc. Users can then address specific circles for targeted information sharing. Users can combine Circles, and drag and drop connections between Circles to reach the most appropriate audience.

Google Plus also refreshes video chat with “Hangouts.” A person “starts a Hangout” and friends are invited to join (a maximum of ten at one time). Within the video chat room, the screen automatically changes to whoever is speaking. Friends can watch YouTube videos together in the chat room and Hangouts can be started directly from YouTube videos.

Despite these distinctions, the overall look and feel of Google Plus immediately recalls Facebook. Sweeping similarities are understandable though. Facebook dictates the definitions of social networking, just as Google rules search engines. A competitor must acknowledge what the public accepts as the norm. The trick is taking users outside of the box and securing an adventurous portion of the market. G+ attracted 25 million users in its first month, a feat which Facebook took three years to accomplish.

However, Google Plus did not get off to an impressive start with business-users. Eyebrows were raised when Google removed many company/brand accounts from Google Plus, including Mashable and Sesame Street. Apparently, Google preferred to keep G+ solely social until its business accounts were fully ironed out. Google addressed the issue with a release, adding,

“The platform at the moment is not built for the business use case, and we want to help you build long-term relationships with your customers. Doing it right is worth the wait.”
–Christian Oestlien, The Google+ Project | Ads Guy

The demand is readily apparent and Google will surely accept business accounts soon. But will G+ business pages attract followers like Facebook’s “Like” version?

Google Plus is currently in beta, using an “invite only” scheme reminiscent of Gmail’s rollout. The buzz is out though, and with detractors already chiming in, G+ should go public quickly. If you receive a Google Plus invite, don’t ignore this burgeoning player. For business and social networking, Google Plus appears primed to draw some attention away from Facebook. It will be interesting to see how Facebook answers.

Are you on Google Plus yet? What’s been your experience? And will it be a priority for you to create a G+ business account when they become available?